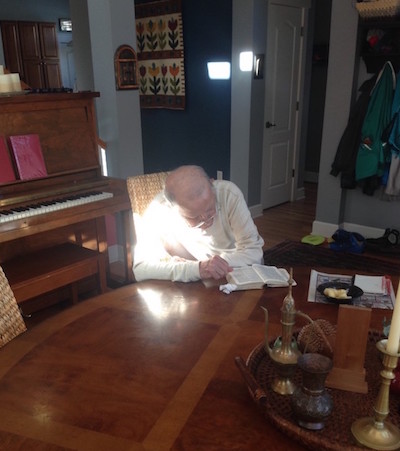 “I need to get outside,” my 81-year old father turns and announces as he swings his arms back and forth standing alone in the middle of the garage.

He’s holding a broom, grinning from ear-to-ear, after my mother called from the basement to report him missing. He drops the broom to pull up his pants, which tend to slip down his small frame from time to time because he doesn’t notice they’re unbuttoned.

“Let’s go this way,” I direct him and open the side door that leads into the backyard. Squinting in the light he shuffles through the garden to the porch and sits down.

“Dad, where were…?” and then I stop myself. I try not to ask my father questions anymore, but it’s not easy. I had to be taught.

“Questioning your loved one with Alzheimer’s causes confusion, frustration and anger,” our instructor told the 12 of us who’d gathered to figure out how to manage our parent, partner or ex husband who was morphing into a different person, “because as the plaque and tangles increase in the brain, they clog the memory centers.”

So instead of questions, I make statements. If he doesn’t like my suggestion, he’ll change it up.

“Dad, I made some iced tea. I’ll bring you some,” I say as I head into the house.

“No thanks,” he smiles, “hot water with some lemon, please.”

Lost and found: that’s my dad pretty much every day. He roams off with absolutely no agenda. When I find him standing on the sidewalk, sitting in the park or stopped on the grass median in the middle of the road, he’s always happy to see me. Without protest he accepts my hand and returns home. Today was easy since he never left the house.

He wasn’t always this obliging. My father used to bring dread, laced with criticism and anger, into our household. I learned early which topics to avoid: women in church, politics, women at work, dancing, dating an African American, divorce, any doctrine other than reformed theology. He was part of the Evangelism Explosion movement and wore a pin emblazoned with two question marks. I would cringe as he scoped out anyone who came to our door, my friends, grocery store clerks, even potential dates so that he could determine their spiritual health by asking them two questions.

“If you were to die today do you know for certain you’d go to heaven?” Followed by “If God were to say to you, why should I let you into my heaven, what would you say?”

As far as I knew, he strictly followed his own fundamentalist rules. Getting up at 5am to pray and read the Bible, he memorized verses on one by three inch cards he would wedge into the bathroom mirror. He rode his bicycle to and from the high school where he taught and would require all six of us squirming kids to sit through a very detailed question and answer family devotion after dinner. If we failed in any area of life, it was attributed to a matter of faith. In his spare time, he served as a ruling elder in our church, which allowed him to deal with backslidden members of the congregation swiftly, efficiently and without discussion. He kept track of everyone in his sphere.

I married at 21, partly to adhere to my dad’s mandate of no sex before marriage and also thrilled to be out from under his authority.  21 years later, the luster had faded to a dull matte finish. While working with a woman from my church on a documentary project, we fell in love and tore apart our marriages. There was plenty of damage all around.

My father told me I would suffer a double damnation because of the many vows, laws and biblical standards he told me I’d broken.

“I will reject you until you repent,” he sternly concluded after visiting me in a park not far from where we were now living together.

The reaction to my choice spread in concentric circles from my family to my friends to my church. The truth I now had to face was that as long as I didn’t stray outside their lines, all was well. But I had and it wasn’t. For the first time in my life, I had publicly jettisoned away from my family’s tightly held beliefs. So began the dis-assembly of my self.

For the next 18 months my partner and I fought so hard against those who opposed us that we forgot what brought us together. We so badly wanted unconditional love that we expected one another to soothe the pain we separately faced. We didn’t have it in us.

Crying on the floor of our perfectly sorted walk-in closet I recounted our many therapy sessions, admitted to myself the relationship must end, and plotted my escape. I probably could have walked right out the front door, but I had whipped myself into such a frenzy of guilt and shame that I was sure I had to run.

In this fearful state I waited for a night when no one was home, then stuffed my sons’ and my belongings into as many trash bags as I could drag behind me and left. I put the key under the mat and started walking.

In a few minutes, a sense of calm replaced the adrenalin coursing through me.

“You are loved,” I heard. I knew that voice. The voice of my mom tucking me in bed when I was nine years old, terrified after a Sunday School teacher told our class some people were predestined to hell. Was I among them?

“Nothing will ever separate you from God’s love,” she said, “do you have faith?”

“Of course,” I whispered now. I had forgotten there was nothing more I had to do. I had lumped God in with everyone who’d shunned, rejected and excommunicated me. As if God agreed with them.

Over the next few years my dis-assembled self began healing and reforming. At the core my faith remained. But instead of a locked box of beliefs with no room for challenges, my core now resembles a butterfly net with room for inhaling and exhaling new ideas and thoughts.

So I was ready when my parents asked if they could move in with me because my dad had been diagnosed with Alzheimer’s.

They arrived with what was left of their earthly possessions, reduced to dozens of photo albums, several paintings, an assortment of clothing, box after box of books and 13 bibles.

“Nice to be here,” he said as my mother unpacked their things in the basement. With those four words I knew exactly what was happening. He was dis-assembling.

The Alzheimer’s had stripped my father of the ability to hold critical thought. While many good people are doing all they can to try and eradicate this fatal disease, his altered state of mind allowed our relationship to heal.

Gone was the anger, the fear, even the ego. He still read daily from the Bible, but no longer would he pronounce judgment on anyone. He petted the dogs and let the cats sit on his lap. He appreciated anything you’d offer him to eat, deadheaded every flower in the garden and took calls from family members until he forgot what he was doing and would set the phone down in mid-conversation. He stopped demanding anything from my mom, following her like an adoring puppy.

She managed him, I managed them and a caregiver filled in the blanks.

At the top of the stairs leading to their basement apartment he stood and waited, gripping the rail. He couldn’t remember how to step down. In that moment, the love I had suppressed for him for years pulsed through my chest all the way to my fingertips as I took his hands and we descended together. There are no hard and fast rules on how to love and be loved. I found myself. I found my father.

When he fell in his bedroom and couldn’t get up, he didn’t complain. It took us a day to realize he’d broken his hip. As he was carried on a stretcher to the ambulance he smiled and asked the technician if she sang in the choir.

Within 48 hours he was in hospice.

For years I believed losing my mind would be the worst thing that could happen. Not anymore. My father’s dis-assembled mind allowed us to dissolve our differences by requiring no-thing of each other.

When my father breathed his last breath, I awoke at the sudden silence and jumped off the floor of his hospice room to stand by his bed.

“You are loved,” I whispered. We had found each other and it was enough.